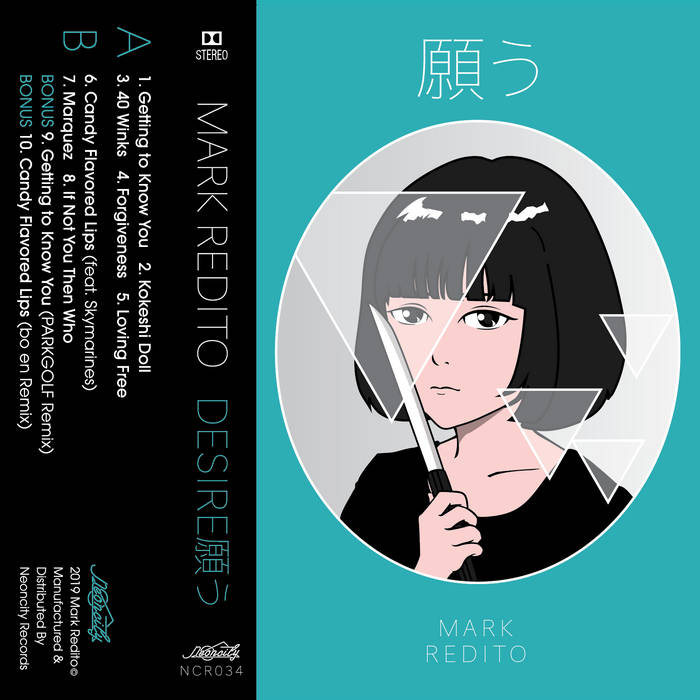 Stultulanimo One of my favourite indie pop albums of all time. The echoed vocals, sweet repetitive melodies with steady progression and beats makes it perfect to just relax and think about the ones you love. 💙 Favorite track: If Not You Then Who.

cardboardcutout I Love Your Work, man !!! Way to go !

liketherogue A classic chill album. So excited to See Mark/Spazzkid getting releases through NCR. Favorite track: Getting to Know You.

After being on hiatus for almost a year (due to a lot of bicycle riding), I found that deep urge to make music again. Between Fall 2012 through Winter of 2013, I locked myself up in my bedroom every day and toiled over recording and mixing songs that would eventually form this new album, “Desire.”

I really wanted “Desire” to have an eclectic sound to reflect the different sounds I’ve been listening to while recording the album. In particular, I found Bibio’s 2011 album, “Mind Bokeh” an inspiration in terms of eclecticism and wanted to achieve that same level of variety. I also found myself taking inspiration from a lot of my peers on Soundcloud who make beats, post-dubstep, chillwave and techno tracks. I knew I wanted my sound to be very “electronic” but I also made it a point to sound warm, organic and imperfect.

Production-wise, I’d like to believe that this is my best sounding album yet. It has been a great learning process for me making this album. I found myself learning and re-learning new things in recording, mixing and mastering. I had always admired high production sounds but I also wanted the intimacy of a bedroom-produced album.

To preserve the lofi and gritty feel, most of the songs here were recorded in one go. I also utilized homemade percussions and field recordings. Sample sources include old tapes, youtube tutorials, and j-pop. All of which were chopped and manipulated then rearranged to become the backbone of most of these tracks.

Collaboration was also something I heavily pursued in this album: both musically and visually. I collaborated with Davao City’s (Philippines), Skymarines on “Candy Flavored Lips.” The look and feel of the album, which is a nod to the Japanese aesthetic, was courtesy of the talented visual artist Krystal Perez and features Shanghai-based photographer and artist, Mang.

I did not have any working theme throughout the album but ended up making songs that I feel are somewhat connected to each other. “Desire” is a deeply emotional and personal album for me and I sincerely hope that you find something in here that you connect to. I invite you to listen to it and if you like it, you would pass it along to your friends and loved ones.